Garrett, a senior member of the basketball team, led the Firebirds to a season-opening victory over Liberty, Mo. with a school-record 36 point effort, including the game winning shot at the buzzer.

According to head coach Sam Stroh, “Garrett has been ‘All In’ from the first day that I arrived at Free State.  He is one of the hardest workers I have ever coached.  Garrett does a great job in the classroom and also helped out with all of our community service projects.  He has a bright future ahead of him and I am looking forward to coaching him for the rest of his senior season.”

Great job, Garrett! Best of luck to you and the Firebirds the remainder of the season! 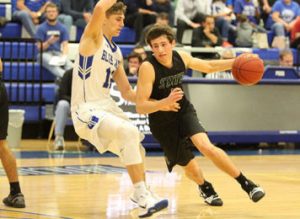 Silver Doubleheader
4:15 am
View All Events